Dr. McCoy’s areas of specialty are in bovine nutrition and reproduction, small animal orthopedics, and soft tissue surgery. He also has a wife, three children, and a beautiful granddaughter. His family raises registered Black Angus, and he also enjoys hunting and fishing in his spare time. 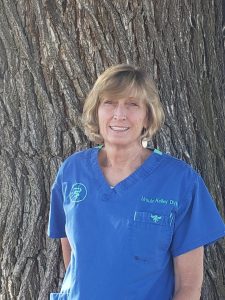 Dr. Ursula Kelley graduated from the University of California Davis School of Veterinary Medicine in 1991 after earning a BS in Biochemistry and a MA in Physiology. She has practiced general small animal medicine in North Dakota and emergency medicine in Washington state. Dr. Kelley relocated to LaGrande in 2000 and initially taught biology at Eastern Oregon University. She joined the LaGrande Small Animal Clinic in 2001 and provided veterinary care there until moving to the Animal Health Center in May of 2013.

Dr. Kelley is a first generation American and grew up near Sacramento, California. She has been married for 28 years. Her husband Ron is a professor of organic chemistry at Eastern Oregon University. Two children and many pets round out her family. In her free time she enjoys outdoor sports like running, skiing and backpacking as well as traveling and trying to outwit the deer in her garden. Dr. Kelley hopes to continue providing quality and compassionate care to your pets at the Animal Health Center. 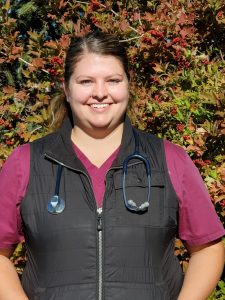 Dr. Christina Danforth grew up in Coeur d’Alene, Idaho where she knew from a young age that she wanted to be a veterinarian. Her love of the outdoors brought her to La Grande where she graduated from Eastern Oregon University with a BS in Biology with minors in Chemistry and Spanish. She graduated from Kansas State University College of Veterinary Medicine in May 2018.

Dr. Danforth is married with one son and a daughter, two dogs and a cat. She enjoys all things outdoors like hunting, fishing, skiing, camping and photography. She is excited to have joined Animal Health Center and to be practicing mixed animal medicine in the great Pacific Northwest. 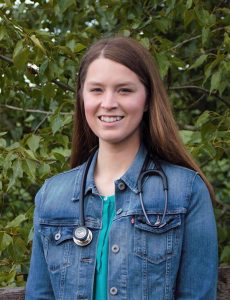 Dr. Megan Paulissen was born and raised outside of Salem, OR. She spent her free time with horses participating in Pony Club, 4H, OHSET and other local shows. Dr. Paulissen received her both her bachelors degree and veterinary degree from Oregon State University (go Beavers!) where her interest for mixed animal practice grew. Dr. Paulissen and her fiancé, Reed, enjoy spending time riding, working around the house and visiting with friends and family. They currently have one cat, six horses and a puppy on the way. Dr. Paulissen is excited to serve this great community.

Font Resize
Contrast
Accessibility by WAH
Call Us Text Us